I love having Pi Phi sisters. We hold our values as an organization to the highest regard. We look for these values in each other, encouraging one another to uphold them. But how often do we look inward and reflect on our own practices of them? In the past year, I have worked hard on our values of Integrity and Personal and Intellectual Growth. True integrity requires honesty, and I was not being honest with myself. 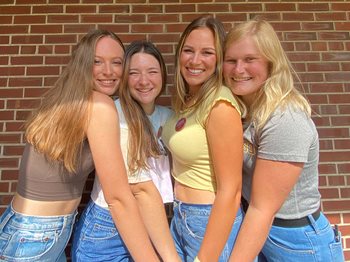 I have known for years that I am a part of the LGBTQ+ community, but it was a truth I denied for half a decade. Out of fear of judgment and ostracization, I kept myself so deep in the closet I refused to even admit my sexuality to myself. I spent high school afraid of who I was and came to college with feelings so repressed I had finally convinced myself they weren’t even there. However, denying my sexuality did not change it, and I ended up falling for my best friend (I know, cute right?). All the fear I had pushed away by refusing to accept my sexuality came rushing back. How was I supposed to come out to my family and friends? How was I going to learn to accept myself after years of rejecting who I was?

The months following the realization of my feelings for her, I struggled with major anxiety. I told a couple of my closest friends; but, even with their love and acceptance, I could not yet come to accept myself. I pushed myself to sit with my feelings of discomfort, I told myself I was valid and I found encouragement in the few people I had come out to. Eventually, I realized the way I feel and who I choose to love has no negative impact on who I am as a person. My worth is determined neither by my sexuality, nor by the way people feel about it. I made the best decision of my life: I told my best friend how I felt about her. In December, we’ll have our one-year anniversary.

Officially being in a relationship with a girl brought a new fear I never thought I'd have to face: keeping my relationship a secret. With both of us being closeted to our families, there was a limited number of people we could tell without the news spreading around. We took it slow, only telling close friends we were comfortable with. Then, I joined Pi Phi.

All of a sudden, I had a sorority full of new friends. As I began going on Big Little and Beta buddy dates, I was shocked by how easily the phrase “I have a girlfriend” rolled off my tongue. There was something so loving about all the women I met. They put Pi Phi values in action, showing me Sincere Friendship through their acceptance of who I am. The pull I felt towards Pi Phi during recruitment was reflected in the comfort I felt being myself once I became a member.

In June, Pi Phi celebrated Pride Month by highlighting LGBTQ+ member stories. I was not yet out to my family and unable to share my story. I reached out about celebrating National Coming Out Day, and was met with a warm excitement about my eagerness to celebrate who I am. I have officially been out to my family for about a month. It took more courage than anything I've ever done before, and it is still not easy. However, I feel more like myself than I have in years. I am happy being true to who I am. Pi Phi offered me a safe space to be unapologetically me and gave me confidence to be open about it.

October is LGBTQ+ History Month. First recognized in 1994, this month includes both solemn and joyous events in LGBTQ+ history such as the anniversary of the first march on Washington for gay and lesbian rights in 1979, National Coming Out Day on October 11 and the anniversary of Matthew Shepard's murder on October 12, the latter of which led to the Matthew Shepard and James Byrd Hate Crimes Prevention Act.

Abigail Valicevic is from Macomb, Michigan and is a member of the Indiana Theta Chapter at Valparaiso University. She is currently a sophomore majoring in biology and chemistry. After graduating from Valparaiso, she hopes to attend medical school.