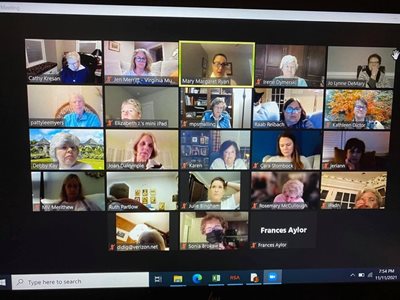 The Richmond Club developed several programs designed to attract a range of interests—including mindfulness, nutrition, gardening, decluttering, a welcome back dinner and a stroll through the Fine Arts and Flowers exhibit at the Virginia Museum of Fine Arts. Between in-person and virtual opportunities, nearly 20 alumnae attended a club event for the first time ever or in recent years.

When the Lake Oswego-Dunthorpe Club’s holiday luncheon was canceled due to the COVID-19 pandemic, club leaders encouraged members to direct the money they would’ve spent toward donations to the family the club supported through the Portland Adopt-a-Family program. The club was able to purchase two lightly used bicycles along with almost all the gifts requested by the family.

Because the need for volunteers in the Detroit area is so great, the Bloomfield Hills Club expanded their involvement in the community. Last year, members collected toiletries for 20 girls and young women residing at Vista Maria—a local non-profit agency providing mental health services, foster care and adoption, and secure care for survivors of human trafficking.

Alumnae Excellence in Fun and Friendship

In 2021, the Southlake Club welcomed club members to the new year with an Olympic-style opening ceremony. At the ceremony, club leaders split members into Beta Teams who were encouraged to participate in monthly competitions ranging from chant-offs and book drives to a game of Pi Phi Jeopardy. Each meeting was met with creativity, whether it be a Taco Tuesday or a yoga session.

Each year the Colorado Springs Club hosts a Founders’ Day celebration for the Colorado Epsilon Chapter. Graduating members are recognized during a presentation with a small gift and invited to sign up for an interest group and attend club events over the summer. All graduates staying in the area are given the option to waive their first year of local alumnae club dues. 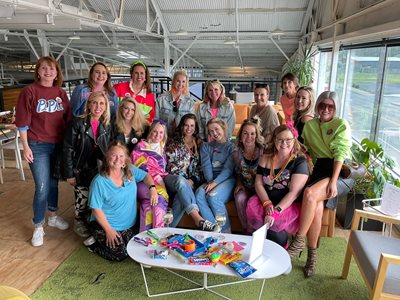 During 2021, the Tulsa Club focused their efforts on a top-down, multigenerational approach which resulted in board members from seven different decades and ensured the club appeals to and accommodates all age groups. Club leaders planned a decade-specific “Arrows in the 80s” party open to all alumnae with personalized invitations sent to all alumnae in the area initiated during the 80s.

Over the past two years, the San Jose Club nominated two local schools for FDS500 grants. Their first grant recipient, Washington Elementary, is the primary school for their second grant recipient, Ohlone Middle School. After meeting with the staff from Ohlone Middle School, one of the club’s members nominated the school to receive additional books from First Book, which resulted in an additional 100 books.

The full list of 2021 award winners will be announced on July 1.