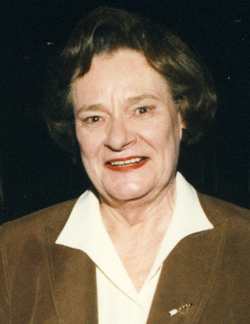 It is with deep sorrow that Pi Beta Phi Fraternity for Women announces the death of Grand President Emerita Jean Wirths Scott, Pennsylvania Beta at Bucknell University, on August 16, 2021. Since her chapter days, Jean served as a leader in Pi Phi and the fraternity world, ushering Pi Beta Phi and the National Panhellenic Conference (NPC) into the 21st century. A passionate leader and Sincere Friend, Jean helped grow the Fraternity as Grand President from 1979 to 1985.

Known by many as the well-respected, bold JWS, Jean had a passion for communicating and was instrumental in the Fraternity’s growth. Jean had a presence that made it apparent someone special, a big thinker, was in the room. Before elected as Grand President in 1979, Jean served as Grand Vice President Philanthropies, having begun her Fraternity work as a club president before moving to the office of Alumnae Province President.

During her term as Grand President, Jean found the Fraternity faced with issues of unprecedented themes: coed fraternities, injury and alcohol liability, drug abuse and hazing. Universities began the practice of issuing relationship statements, which at times infringed upon the rights of members, chapters or the Fraternity. Jean oversaw the development of alcohol and drug awareness programs; new chapter programs were launched, and a firm stand was taken against hazing practices. Jean’s passion for ending hazing led to the Fraternity issuing first of its kind anti-hazing standard in 1985. Under her guidance, the Fraternity began its relationship with legal counsel Manley-Burke leading to a critical partnership which has benefited the Fraternity and greater fraternal industry in the decades since. Through it all, Jean’s calm approach, deep knowledge, care and concern, helped produce long-lasting solutions.

“Friendship” was the theme of her tenure, and she was personification of the word. Working in the present, but always with an eye to what lay ahead, Jean said, “I am confident that we are up to the challenge of whatever the future holds for us. Pi Beta Phi enters the future as a leader … in friendship with confidence.”

In an extension of her loyalty and service to the Fraternity, Jean served Pi Beta Phi Foundation in many roles, including the Board of Trustees President from 2005-2007. During her tenure as Grand President for the Fraternity, the Friendship Fund at Pi Beta Phi Foundation was established. Under her leadership, Pi Phi took extra steps to provide services, programs, communication, and financial assistance for the Fraternity's membership. Through her foresight, contributions to the Friendship Fund made those extra steps possible and allowed the Fraternity to plan for the future. Jean's focus on ensuring the future of our sisterhood was evident in her leadership of the first endowment building campaign the Foundation conducted for Pi Phi.

In 1985, Jean expanded her service to the Panhellenic community as National Panhellenic Conference (NPC) Delegate, Treasurer, Secretary and Chair. From 1995-1997, as Chair of the Conference, Jean led the 26 member groups with enthusiasm and vision for the future. Through her work, Jean continued her mission to abolish hazing. In addition, Jean led the development of values-based drug programming focusing on risk management with assistance from the Higher Education Center for Alcohol and other Drug Prevention and supporting the implementation of substance-free housing at colleges and universities through participation in an NPC/NIC Joint Commission. Jean closely worked with the North American Interfraternity Conference (NIC) to address hazing, develop risk management programming and empower all members to bring positive recognition to the fraternity and sorority community. 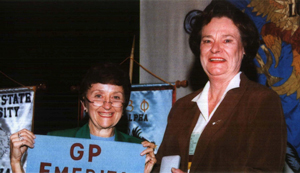 Throughout her lifetime of service to the fraternity and sorority community, Jean has been honored numerous times. In 1996, she received the NIC Gold Medal—the highest honor the NIC bestows—for demonstrating her lifelong commitment to volunteer and professional service to fraternities. Jean was named Pi Beta Phi Panhellenic Woman of the Year in 1997, for her remarkable dedication to the Fraternity and to the entire fraternity and sorority community. Then, in 1998, the College Fraternity Editors Association (CFEA) proudly recognized Jean as the winner of CFEA’s most prestigious honor, the Evin C. Varner Award for performing extraordinary fraternal service and achieving peer respect through the spirit of assistance and kindness. At the 2003 Convention in Anaheim, California, past Grand President Sis Mullis presented Jean the title Grand President Emerita, an honor bestowed in recognition of exemplary service to the Fraternity.

Because of Jean’s visionary leadership, the Fraternity began awarding the Jean Wirths Scott Leadership Award for Outstanding Change Leadership in 1987, recognizing a member who has implemented changes and improvements in the chapter or the local Collegiate Panhellenic Council.

Jean's deep care for the fraternity and sorority community and the individuals involved made her an exemplary leader. Touching lives through the years of servant leadership and enriching all who knew and worked with her made her a true friend. Jean is a legend within Pi Beta Phi and the greater fraternity fraternal community. She will be dearly missed.

More about Jean can be read in the Fall Arrow. If you would like to honor Jean’s legacy, memorial gifts may be made to the Friendship Fund or the Past Grand Presidents Memorial Graduate Fellowship Fund at Pi Beta Phi Foundation.