Pi Beta Phi believes reading always has been—and always will be—a powerful step toward a life of enduring impact. Our members seek to inspire a lifelong love of reading through Read > Lead > Achieve® literacy initiatives, fundraising events and activities, making a difference for children in communities across North America.

Local Impact Grants help expand the reach of the Fraternity’s literacy work while also providing a way for Pi Phis to support reading programs and access to books for children close to home. As chapters and alumnae clubs fundraise for The Literacy Fund at Pi Beta Phi Foundation, they can nominate an organization in their community to receive a Local Impact Grant from our Foundation. The program allows clubs and chapters to direct 25% of their fundraising contributions to a literacy-focused nonprofit, matched dollar-for-dollar by a grant from our Foundation. 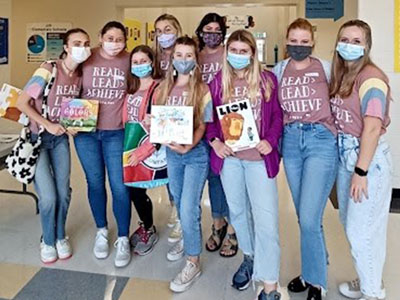 In 2021, our Foundation provided $60,113.56 in Local Impact Grants to 30 organizations, bringing the total amount awarded to more than $743,500 since the program’s launch in 2013. Recipients include organizations such as Title I schools, tutoring and mentoring programs and community foundations. Grants are used to support literacy programs and purchase books for classroom and home libraries—providing reading materials for children who otherwise might not have access to quality, age-appropriate books.

The Wisconsin Alpha Chapter nominated the Madison Reading Project to receive a Local Impact Grant. Fundraising Coordinator Sarah Burke said the grant would support the organization’s Books & Activity Kits program. “We send monthly kits filled with books and an art or STEM project to our community partners, serving more than 400 children in the area,” Sarah reported.

Team First Book Philadelphia and the West Philadelphia Alliance for Children (WePAC), nominated by the Philadelphia-Main Line, Pennsylvania, Alumnae Club, said their grant would help reopen libraries and prepare students as they returned to in-person learning. “When the Philadelphia Public Schools shut down in March 2020, at least 2,400 books were checked out of our libraries,” explained Marni Fogelson, co-chair of Team First Book Philadelphia. “We anticipate we will need to replace many of those titles. The Foundation's support will allow us to remain flexible as we work to reopen our libraries and prepare for the 4,750 students we serve.”

Kids Need to Read - Our Shelves

Nominated by the Arizona Alpha Chapter

Nominated by the Indiana Gamma Chapter

Nominated by the Kansas Beta Chapter

Nominated by the Louisiana Beta Chapter

Nominated by the Oklahoma Beta Chapter

Nominated by the Texas Eta Chapter

Nominated by the Virginia Iota Chapter

Nominated by the Wisconsin Alpha Chapter

Photo from the Louisiana Beta Chapter which nominated Winbourne Elementary School to receive both an FDS500 grant and a Local Impact Grant in 2021. Louisiana Beta members spend time each week with Winbourne’s first and second grade students, working on literacy, writing and reading comprehension skills through the Champions are Readers® program.