The sisterhood of Pi Beta Phi is lifelong, steadfast and pervasive. While there are many opportunities to meet Pi Phis from around the world, many of the sisters who stay with us through our lives are those we meet within our chapters. The bonds of wine and blue bind us all together, but the bonds forged within our chapters will always hold a special place and meaning. In honor of this cherished connection, we celebrate Chapter Loyalty Day.

For more than 75 years, Pi Phis have celebrated Chapter Loyalty Day on or around January 9. While this day often falls during a break from classes for many chapters, its selection dates back to the 1946 Swampscott Convention where the gathered sisters voted to recognize Iowa Gamma Carrie Chapman Catt for her Lifelong Commitment to our sisterhood—and womanhood at large. 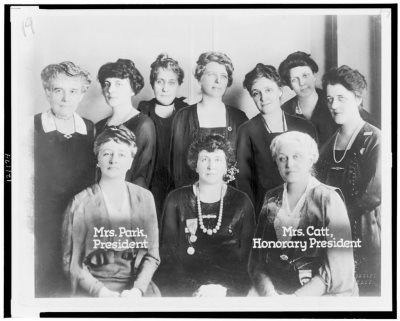 Known to most as a suffragist integral to the fight for women’s right to vote throughout the late 1800s and early 1900s, Carrie was also a committed Pi Phi sister whose loyalty to her chapter and the Fraternity was as notable as her many accomplishments.

Carrie (front right) alongside members of the League of Women Voters, a nonpartisan organization that continues to empower and inform voters.

Carrie was a keynote speaker at multiple Pi Beta Phi events, including the 1890 Galesburg Convention and the Eastern Conference in 1924. Though she was unable to attend, the 1946 Convention body voted to commemorate Chapter Loyalty Day on Carrie’s birthday, mere months before her passing in 1947. In response to an invitation, Carrie wrote, “The Pi Beta Phi when I was a schoolgirl was a small, struggling circle of small membership and with no particular aim. Now I find Pi Beta Phis everywhere. They are all intelligent, ambitious and filled with plans for making the world better. I am proud of them, although most of them I have never met.”

Throughout her lifetime, Carrie’s dedication to Pi Phi was on display, as was her commitment to women’s suffrage. She served as President of the National American Woman Suffrage Association (NAWSA) from 1900 until 1904 and went on to found the League of Women Voters. Carrie’s brilliant organization and oratory skills are credited with making the Nineteenth Amendment a reality.

She was also a woman who—like all of us—continued learning, growing and adapting throughout her lifetime.

Carrie’s personal legacy demonstrates an active intent throughout her lifetime to keep her mind and heart open and evolve her beliefs in line with human rights and social justice efforts. Her legacy followed a pathway to greater understanding, inclusion and acceptance, though it’s not without issue in these areas. Early women’s suffrage efforts were not always focused on equality and equity on a broader scale, including for other marginalized groups. Throughout the early 20th Century, Carrie not only walked back previous exclusionary and divisive rhetoric, but she also used her influence—and that of the entire NAWSA organization—to advocate for equal protections regardless of sex, race, color or creed.

Even as her viewpoints and perspective evolved over time, Carrie’s loyalty to her chapter remained strong and became an inspiration for many. Every Pi Phi can remember her story and take the opportunity to reflect on their own love for their chapter at any time. Whether in early January, on your chapter’s charter date or any given day, sisterhood in Pi Beta Phi is worth celebrating for a lifetime. In honor of Chapter Loyalty Day, consider reaching out to a sister, catching up with your chapter on social media or wearing your badge or letters. As Carrie said, Pi Phis are everywhere, and there is always an occasion to celebrate our sisterhood.