On Veterans Day, we honor those who have served in the United States Armed Forces. Pi Beta Phi thanks our sisters and all those who have served and are currently serving in the military. In honor of Veterans Day, we asked two Pi Phi veterans to reflect on what led them to the military, the lessons they learned and how their Pi Phi sisters help them celebrate their service.

What led you to serve in the military?

I was interested in serving in the military ever since I was little. However, I did not come from a military family and was unsure how to pursue a military career until I went to college at George Washington University and met several Marine Veterans in my classes. As the Marine Veterans got to know me, they encouraged me to speak to a recruiter and begin the process of applying to Officer Candidate School (this is the officer equivalent of boot camp). By the beginning of my senior year of college, I was accepted to Officer Candidate School (OCS). Two weeks after graduating from college, I reported to OCS and began my military career. 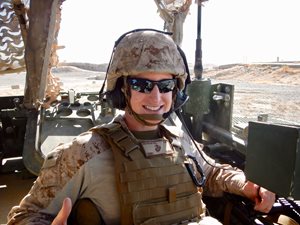 What was the most impactful lesson you learned in the military?

The Marine Corps taught me that I could do anything that I set my mind to. Marine Corps training pushes everyone to their physical and mental limits and teaches you to push yourself beyond any perceived boundaries. After overcoming many difficult challenges in the Marine Corps, I know that I can do anything.

How are you celebrating Veterans Day?

This year I will be having a quiet Veterans Day with my husband. We will probably do something simple like take a walk along the beach together and appreciate the freedom we enjoy every day here in America. I also always try to take a few quiet moments alone to remember all of my brothers and sisters who laid down their lives in the service of our country.

What led you to serve in the military?

It was 1968 and the University of Wisconsin in Madison was in a firestorm against the Vietnam War. I was a senior with no job prospects. My phone rang early one evening in March. The caller said, "This is your Air Force recruiter. We want you to be an officer in the United States Air Force.” I thought it was a joke! I asked who it really was. Most of my friends were aghast when they learned my plans, even some of my Pi Phi sisters. Since my dad was a WWII vet, he encouraged me. I figured I was the only rebel in town — no one else would do this! I wanted an adventure; to be a patriot, like my dad. 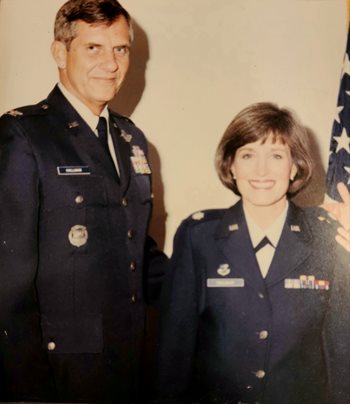 At that time, there were hardly any female line officers (not nurses or medical fields). At Officer Training School in San Antonio, Texas, I was one of only 50 women compared to 1,000 men. I was appointed commander of the women, or "Super WAF."  In those days, women were referred to as Women in the Air Force (WAF). My mentor was a female: Captain. She was an incredible role model for me.

My first assignment was in Phoenix, Arizona. I was 21, a brand-new 2nd Lieutenant and had 20 young guys working for me in a personnel office. A year later, in 1969, I was assigned to the US Air Force Academy (USAFA) in Colorado Springs, Colorado.  It shocked the all-male bastion of the USAFA.  As usual, cadets and regular USAFA personnel often referred to me as "Sir," rather than, "Ma'am." They had never seen a female officer before. Part of my job was to start preparing the academy for future female cadets. The first female cadet did not arrive until 1976.

Four years later, I was assigned to Albuquerque, New Mexico. While there, I was to organize and command a WAF squadron. About 100 women were assigned to the base. They had dormitories and an organization. Two years later, 1976, the United States Air Force was fully integrated! My orders were to disband the WAF squadron and integrate the dormitories. We would no longer be called WAF. We were airmen. We were officers.

How do your Pi Phi sisters celebrate your military service?

My Pi Phi sisters celebrate my military service at every reunion! At our last reunion a couple years ago, they insisted I teach them all how to salute.  We had lots of laughs!  They always have honored me and my service and I am grateful.  They honored my husband as well; he was a career military officer, too.

Pi Beta Phi thanks those who have served and are currently serving in the military. We express our deepest gratitude for your selfless service.